Javascript is currently disabled in your browser. Several features of this site will not function whilst javascript is disabled. Received 23 March Published 4 August Volume Editor who approved publication: Incidence of hemorrhagic complications from neuraxial blockade is unknown, but classically cited as 1 inepidurals and 1 inspinals.

However, recent literature and epidemiologic data suggest that for certain patient populations the frequency is higher 1 in 3, Data from evidence-based reviews, clinical series and case reports, collaborative experience of experts, and pharmacology used in developing consensus statements are unable to address all patient comorbidities and are not able to guarantee specific outcomes.

Newly added coagulation-altering therapies creates additional confusion to understanding commonly used medications affecting coagulation in conjunction with RA. Investigations of large-scale randomized controlled trials studying RA in conjunction with coagulation-altering medications are not feasible due to: Therefore, attempts at striking a balance between catastrophic thromboembolic events and hemorrhagic complications will remain a strategy for clinicians practicing RA in the perioperative environment.

However, no specific clinical outcome can be guaranteed from the suggested guidelines. Basic pharmacokinetic rules to observe include the following: Coagulation-altering medications used for prophylactic-to-therapeutic anticoagulation present a spectrum of controversy related to clinical effects, surgery, and performance of RA, including PNB, especially in the medically compromised.

They range from low risk for performing neuraxial procedures during acetylsalicylic acid aspirin therapy to high risk for preforming such interventions with therapeutic anticoagulation. Combining two or more coagulation-altering medications can lead to adverse clot-forming activity, increases the risk of hematoma development, and raises concern of neurologic compromise when RA is planned.

Studies showed that combining two hemostasis-altering compounds have an additive or synergistic effect on coagulation, with increased risk of bleeding.

Many surgical patients use herbal medications with potential for complications in the perioperative period because of polypharmacy and physiological alterations. Some complications include bleeding from garlic, ginkgo, and ginseng, along with the potential interaction between ginseng and warfarin.

However, there are reports of spontaneous bleeding anticoagukation patients on aspirin alone with antocoagulation additional risk factors following neuraxial procedures.

Such variable differences cause difficulty when considering RA, as there are no acceptable tests that will guide antiplatelet therapy. Anesthetic management of patients receiving unfractionated heparin UFH should start with review of medical records to determine any concurrent medication that influences clotting mechanism s. Risks of bleeding are reduced by delaying heparinization until block completion, but may be increased in debilitated patients following prolonged heparin therapy.

Intraoperative heparin anticoagulation during vascular surgery combined with neuraxial anesthesia is acceptable with the following: Therefore, a risk—benefit decision should be conducted with the surgeon and 1 using low-dose anticoagulation 5, U and delay its administration for 1—2 hours; 2 avoiding full intraoperative heparin for 6—12 hours; or 3 postponing surgery to the next day should be considered.

Alternatively, an epidural catheter placement could be placed the evening before surgery. In situations of full anticoagulation ie, cardiac surgeryrisk of a hematoma is unknown when combined with neuraxial techniques.

Therefore, if using neuraxial anesthesia during cardiac surgery, it is suggested to monitor neurologic function and select local solutions that minimize motor blockade in order to facilitate detection of neuro-deficits.

In patients receiving preoperative therapeutic LMWH, delay of 24 hours minimum is recommended to ensure adequate hemostasis at time of RA procedure. Catheters may be maintained, but should be removed minimum 10—12 hours following the last dose of LMWH and subsequent dosing a minimum of 2 hours after catheter removal. Asrz hemostasis-altering medications should be avoided. Twice-daily postoperative LMWH is associated with increased risk of hematoma formation, so first dose should be delayed 24 hours postoperatively along with evidence guideline adequate hemostasis.

Catheters should be removed before twice-daily LMWH initiation and subsequent dosing asrx 2 hours postcatheter removal. If thromboprophylaxis is planned postoperatively and analgesia with neuraxial or deep perineural catheter s has been initiated, INR should be monitored on a daily basis. Despite potential for more efficacious clinical effects with these newer agents, incorporating risk factors of pharmacodynamics and pharmacokinetics in combination with RA can influence risks of hematoma development.

Fondaparinux can accumulate with renal dysfunction, and despite normal renal function, stable plateau requires 2—3 days to be achieved. Therefore, manufacturer recommends reducing dose with moderate renal insufficiency, and is contraindicated in those with severe renal insufficiency. Clinicians should adhere to regulatory recommendations and label inserts, particularly in clinical situations associated with increased risk of bleeding. Some evidence exists that patients may be monitored with anti-factor Xa activity, prothrombin-time, and aPTT activated partial thromboplastin time; shows linear dose effect.

Therefore, as per ESRA guidelines, an interval of 22—26 hours between the last rivaroxaban dose and RA is recommended, and fir dose administered 4—6 hours following catheter withdrawal.

Lack of information and approved applications along with no consensus regarding risk assessment or anticoagluation management regarding RA is available. This results in a time interval of 26—30 hours between last apixaban administration and catheter withdrawal, with next dose-delayed 6 hours.

As experience with this agent is limited, along with wide-ranging pharmacokinetics of apixaban therapy, it is warranted to delay postprocedure administration by 6 hours. Indirect factor Xa inhibitor with coagulation effects through antithrombin-mediated inhibition of factor Xa.

There are reports of severe bleeding, there is no antidote, and it cannot be hemofiltered, but can be removed using plasmapheresis. Thromboprophylaxis recommendations indicate that first dose be administered 2 hours preoperatively, then twice daily. Although neuraxial blockade was performed in a small number of patients during clinical trials, RA is not being recommended as significant plasma levels can be obtained with preoperative dosing.

Initial trials with idraparinux were abandoned due to major bleeding and were reformulated to idrabiotaparinux. Some trials have reported similar efficacy with less bleeding compared to warfarin. 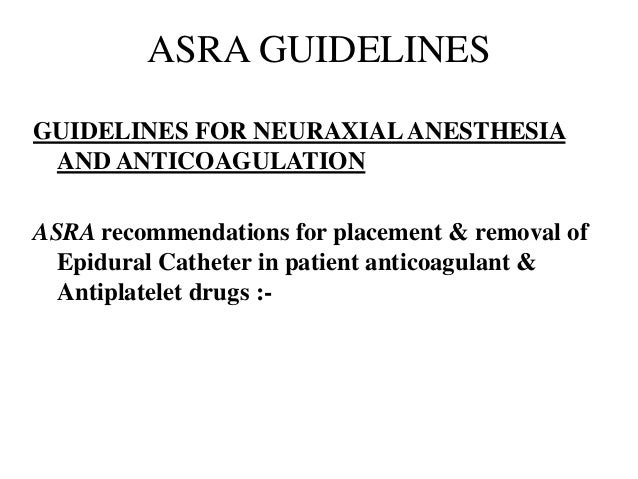 There are positive findings from clinical trials of an antidote which may reverse anti-factor Xa consequences of idrabiotaparinux.

These medications lack a specific antidote, but hirudins and argatroban can be removed with dialysis. These recombinant hirudins are first generation direct thrombin inhibitors and are indicated for thromboprophylaxis desirudinprevention of DVT and pulmonary embolism PE after hip replacement, 30 and DVT treatment lepirudin in patients with HIT.

Prolonged aPTT is required for effective thromboprophylaxis, and following a single injection of desirudin, there is an increase in aPTT which is measurable within guixelines minutes and reaches a maximum in 2 hours. In early clinical trials, desirudin was administered in a small number of patients undergoing neuraxial puncture without evidence of hematoma single report of spontaneous epidural hematoma with lepirudin.

Owing to lack of information and application s of these agents, no statement s regarding RA anticoagulaiton assessment and patient management can be made HIT patients typically need therapeutic levels of anticoagulation making them poor candidates for RA.

Therefore, no statement s regarding risk assessment and patient management can be made. Administration of thrombin inhibitors in combination with other antithrombotic agents should always be avoided. However, secondary to potential bleeding issues and route of administration, the trend with these thrombin inhibitors has been to replace them with factor Xa inhibitors ie, fondaparinux — DVT prophylaxis or use of argatroban factor IIa inhibitor for acute HIT.

It is intravenously administered, reversible, and a direct thrombin inhibitor approved for management of acute HIT type II. However, dose reduction should be considered in critically ill and those with heart failure or impaired hepatic function.

These agents dissolve clot s secondary to the action of plasmin. Plasminogen activators, streptokinase, and urokinase dissolve thrombus and influence plasminogen, leading to ghidelines levels of plasminogen and fibrin.

Thromboembolism remains a source of perioperative compromise, yet its prevention anticoagulwtion treatment are also associated with risk. Bleeding can occur with prophylactic and therapeutic anticoagulation as well as thrombolytic therapy.

Intracranial, intraspinal, intraocular, mediastinal, or retroperitoneal bleeding are classified as major; bleeding that leads to morbidity, results in hospitalization, or requires transfusion is also considered major.

Risk factors for bleeding during anticoagulation include intensity of anticoagulant effect, increased age, female sex, history of gastrointestinal bleeding, concomitant anticoagulant use, and duration of therapy. In a case-control study, risk of intracranial hemorrhage doubled for each increase of approximately 1 in the INR. This is a situation where risk-to-benefit analyses must be performed when considering RA, as minor procedures do not require interruption of therapy, whereas continuation of coagulation-altering medications in setting of major surgery increases bleeding risks.

Perioperative management guidelines of antithrombotic therapy in such situations have been addressed by the ACCP 49 and summarized in Table 4but complexity arises during perioperative planning in determining who is at risk and determining whether or not to perform RA 50 as well as types of surgeries considered low-to-high risk.

Table 4 Risks stratification, perioperative management, and chemoprophylaxis Abbreviations: Neurologic dysfunction from hemorrhagic complications of RA is unknown, but is suggested to be higher than previously reported and increasing in frequency.

Such results revealed that risks of gkidelines significant bleeding increases with age, abnormalities of the spinal cord or vertebral column during neuraxial RApresence of an underlying coagulopathy, difficulty during RA needle placement, from an indwelling catheter during sustained anticoagulation and a host of surgery-specific circumstances immobility, cancer therapy, etc.

Therefore, vigilance, prompt diagnosis, and intervention are required to eliminate, reduce, and optimize neurologic outcome should clinically significant bleeding occur. Anticoagulant and thromboprophylactic medications and duration of administration should be based on identification of individual- and group-specific risk factors Tables 2 and 4.

Individualized approach s alone to guixelines proves to be complex and not routinely applied, so recommendations are by default group specific. However, as newer thromboprophylactic agents are introduced, additional complexity into the guidelines duration of therapy, degree of anticoagulation and consensus management must also evolve.